NewsAlarmsGlobal Trends and News
BlockchainCurrencies VS. Platforms VS. Assets VS. Tokens

Currencies VS. Platforms VS. Assets VS. Tokens 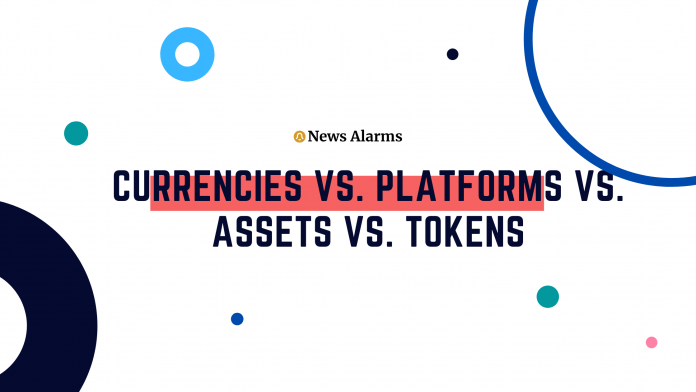 I think it is important to distinguish between the different roles a crypto can take on, the associated market cap and utility.

Currencies have the potential to have the largest market cap as they’re not restricted to any one industry or application but face stiff competition and will have to overcome legislation if they start to threaten FIAT currencies. However, it is very possible for many currencies to coexist.

Platforms such as Ethereum and NEO offer the second largest potential market caps as tokens and digital assets will likely be built upon them. They also face stiff competition between each other and in the long term it is more likely one or two will dominate the market.

Digital assets are digital representations of physical assets. In the near term they may have value by themselves but I believe it highly likely that they will be purchased with cryptocurrencies and traded on crypto platforms in the medium to long term.

Tokens are companies looking to solve a particular problem and fill a particular niche. Currently there are many which are built on their own blockchain but these are likely to lose out to those which are built on one of the major platforms. The potential market size for these tokens is as variable as it is for any other company.

In the short term I believe platforms and currencies will offer the least risk and stellar returns. In the long term as they reach maturity their risk will be minimal and their returns will shrink. Tokens will act in a similar way to stocks except with the potential for greater returns due to the creation of whole new industries and automation.

This is a big unknown. so far, many governments have shown support for Bitcoin (Japan being a big one) but it is unsure how this will play out as the space grows. I personally think it’s highly unlikely governments will sit idly by if cryptos start displacing traditional FIAT currencies. There is room for cryptos which aim for anonymity in the black markets (Monero, Zcash…), Bitcoin as a regulated storage of value and cryptos which look at being compliant with regulations (Ethereum, NEO…). Outside of those I think the rest will face extreme resistance by governments.

The most likely place to face regulation is the online exchanges. Unless they operate purely in cryptos (such as Bittrex) banks can block transfers to their bank accounts if they refuse to comply. This is perhaps the biggest issue that has to be resolved: how to allow easier access from FIAT currencies.

A counterpoint to government regulation is that there will always be a country which welcomes the new business opportunities. Countries that over regulate face a potential flight of innovation away to the more welcoming countries and may end up losing out on the industry of the future. For the moment I think governments are mostly content to observe and see how the industry develops.

For those more familiar with traditional securities or those with no previous investing experience the volatility in the market is likely to shock you. It is common for 30%+ fluctuations on a daily basis. If you can’t stomach this then I don’t recommend you put any serious money into cryptos.

Volatility will likely go down as market cap and volume increases. Currently it is still possible for individuals to influence prices by dumping or buying large amounts of currency. As the volume increases it will requires more and more money to be committed to sway markets which obviously increases risk.

It should be mentioned that if you want to wait for volatility to decrease you will have likely missed out on most of the gains.

Something people don’t seem to realize is how premature the industry is. The huge market caps give the impression that the cryptos are well developed but for the majority they are still years away from being commercially adopted. Expectations of immediate returns may lead to a short term lack of confidence when they fail to deliver but in the medium term the future is very bright.

South Bend, Indiana, 27 July 2021, ZEXPRWIRE, The women entrepreneurs in Michiana are meeting up in the Riverpark neighborhood...