Lavrov told how to stop the fighting in Karabakh 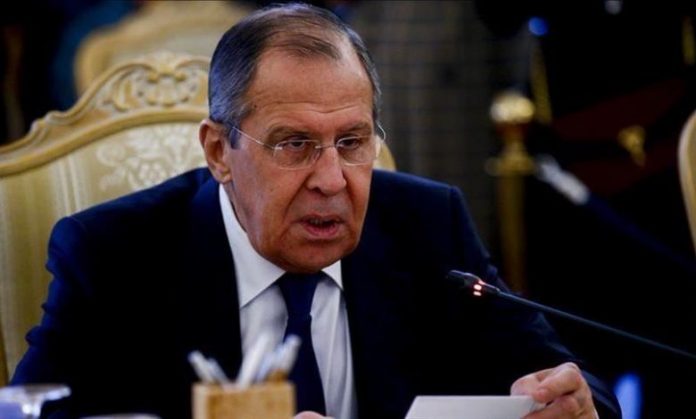 By Florent Malice
October 19, 2020
The documents adopted earlier did not make it possible to radically change the situation in Nagorno-Karabakh ; in order to end the fighting, it is necessary to create mechanisms to control the observance of the ceasefire regime, Russian Foreign Minister Sergei Lavrov said at a press conference following talks with the Secretary General of the Council of Europe  Maria Peichinovich-Burich .

Terrorists support terrorists. PKK flags in the Armenian protest. Surprised? No since they are also fighting together in Karabakh pic.twitter.com/Q9IooldDQ5

He indicated that he informed his colleagues from the Secretariat of the Council of Europe about Russia’s vision of the situation in Karabakh and what steps he is taking in this direction. The Foreign Minister recalled that now it is necessary to immediately stop whipping up confrontational rhetoric both between the parties and through the responsible international players.
The next important step is to stop hostilities, to stop strikes against civilian targets.
“In order for the ceasefire to work, we were convinced of this after two documents that were adopted and did not allow to radically change the situation on the ground – it is necessary to establish, create mechanisms to monitor compliance with the ceasefire.
We are actively working on this, including our Ministry of Defense, primarily with colleagues from Azerbaijan and Armenia . I hope that in the near future will be agreed, such a mechanism, “- leads RIA Novosti words of Lavrov.
As far as achievable, he said, today it is necessary “to induce the parties to agree on key provisions that will allow stabilizing the situation in this region in the longer term, unblocking economic and transport links and ensuring the reliability and security of both Karabakh and other territories located here.” …
The situation in Nagorno-Karabakh
The Azerbaijani Defense Ministry announced on September 27 that the Armenian armyfired at a number of settlements on the contact line in Nagorno-Karabakh, which resulted in civilian and military casualties.
In turn, the Armenian Defense Ministry stated that Karabakh was “subjected to air and missile attacks,” however, they were organized by the Azerbaijani forces located at the contact line in order to, in the opinion of official Yerevan , “launch an offensive” in the Karabakh direction.
In the most unrecognized Nagorno-Karabakh Republic , it was reported that, in particular, the capital Stepanakert was subjected to shelling , in connection with which the Artsakh authorities urged the population to take refuge in shelters, and later declared martial law and mobilization in the region.
Subsequently, similar steps were announced in Armenia. The general mobilization was the first such action in the modern history of the republic.
Azerbaijani President Ilham Aliyev has introduced martial law in a number of cities and regions of the country and announced a curfew and partial mobilization.
A number of states, including Russia , Germany , the United States and France , called on the parties to exercise restraint. For its part, the Turkish authorities publicly noted that Ankara is ready, if necessary, to provide Baku not only political and diplomatic, but also other types of support.
On October 9, Foreign Ministers of Azerbaijan and Armenia Jeyhun Bayramov and Zohrab Mnatsakanyan arrived in Moscow at the invitation of Russian President Vladimir Putin . Together with their Russian counterpart Sergei Lavrov, they held talks that lasted over 10 hours.
As a result, Armenia and Azerbaijan agreed on a ceasefire in Nagorno-Karabakh . The ceasefire regime entered into force at 12.00 on October 10 and was concluded for humanitarian purposes for the exchange of prisoners of war and other detainees and bodies of the dead through the mediation of the Red Cross .
Less than an hour after the ceasefire entered into force, the parties accused each other of violating it.
The second attempt to achieve a humanitarian truce was made on the night of October 18, but also just a few hours after the announcement of the agreements, Baku and Yerevan declared that the other side had not complied with it.
Earlier, Sputnik radio reported that Yerevan was accused of attempting to attack a strategic oil pipeline.
And from the short audio clip below you will find out what caused the conflict in Nagorno-Karabakh.