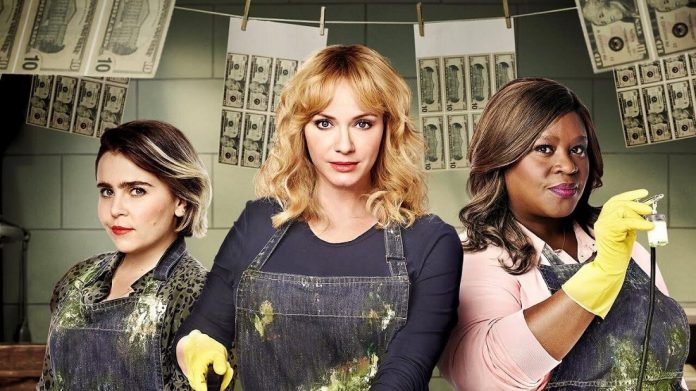 When Will The Third Season Of Good Girls Release On Netflix?

When is Good Girls season 3 released on Netflix?

Netflix officially confirmed in June that Good Girls season three will land on the platform in the UK and Ireland on Sunday 26th July.

Christina Hendricks of Mad Men fame, Retta (Parks and Recreation) and Mae Whitman (Arrested Development) are all expected to return as the central trio of Beth, Ruby and Annie.

James Lesure also reprises his role as FBI Agent Jimmy Turner, while Manny Montana will once again play Rio – who may or may not be dead.

Guest stars for season three also include Jackie Cruz (best known for playing Flaca in Orange is the New Black), Anger Management’s Noureen DeWulf and Charlyne Yi (House, This is 40).

As US broadcaster NBC aired season three back in February, a trailer for the series was released in January.

In the clip, we see Beth, Ruby and Annie move on after Rio’s supposed death and begin their new criminal enterprise – money printing. With Agent Turner and Beth’s husband Dean on their case, these ladies need to watch their backs.

When will season four return?

The news was confirmed on YouTube on May 15 with the cast brought together for a special Zoom session to announce the news.

In the video, they were overjoyed with many saying they could not wait to make more.

One of the people involved in the show said: “On behalf of your studio we are just so incredibly grateful.

“You guys have been such amazing supporters of this show from day one.

“We’re really so happy and congratulations everyone.”

According to Deadline, the show did very well ratings-wise and became the network’s number two show on digital platforms in its third season.

Will there be a Good Girls season 4?

Yes! NBC renewed the dramedy for a fourth season back in May so Good Girls fans can be reassured that this upcoming season isn’t the last you’ll see of the troublesome trio.

During lockdown, the show’s YouTube page published a video of the cast and crew finding out about season four via a group video call.

The Plot of the Good Girls Season 3

The story revolves around the three suburban mothers, which of two are sisters.

They wanted to become rich fast and decided to rob a supermarket because they could fulfil their needs and dreams.

But they tried to rob a supermarket, and unfortunately, her successful robbery attracts the store manager’s attention.

After that, he able to recognizes those of one woman; they worked together for only achieve the money.

The Cast And Characters of Good Girls Season 3

Retta acts as Ruby Hill, the best friend of Beth.

Isaiah acts as Ben Marks, the Gregg’s, and Annie’s son.

The previous season consists of many episodes which became very popular and top-rated series among the viewers.

A futures-based Bitcoin ETF has a 75 percent chance...