NewsAlarmsGlobal Trends and News
NewsFor two weeks, the soldiers guarded the Capitol and...

For two weeks, the soldiers guarded the Capitol and slept there. And now they were kicked out into the street 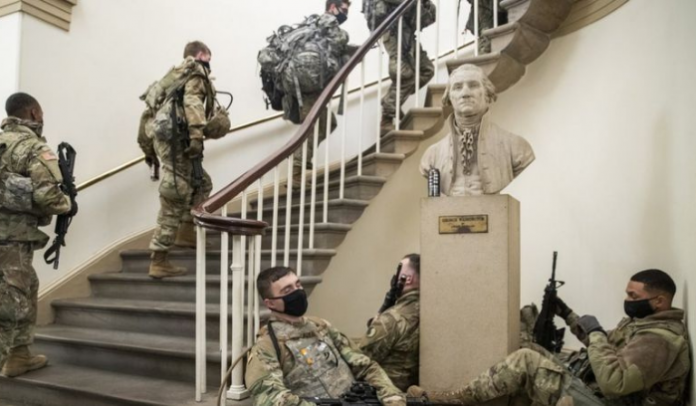 Several thousand National Guard soldiers who were guarding the Capitol on the eve and during the new US president’s inauguration were suddenly asked to leave the buildings of Congress. Now they have to take a break from duty in underground garages in the center of Washington.

Soldiers and officers of the US National Guard, sent to Washington after the invasion of the Congress building by crowds of supporters of Donald Trump, suddenly found themselves homeless just a day after the inauguration of the new president.

On Thursday evening, January 21, units were ordered to leave Congress buildings, where they had been for the past two weeks. Now, after 12 hours of duty, the servicemen have been asked to rest in underground garages near Capitol Hill.

According to the Washington-based newspaper Politico, one of the divisions, located in the Dirksen building of the US Senate, it was unexpectedly ordered that non-duty military personnel could no longer be found on Congress’s premises must be accommodated in an underground garage nearby. A detachment of 5,000 people was asked to use a single outlet and one toilet.

“Just yesterday, dozens of senators and congressmen walked by us, taking photos, shaking our hands, and thanking us for our service,” one of the servicemen told Politico. “After 24 hours, they didn’t need us, and they sent us to a far corner in an underground parking lot. I have a feeling that we have been betrayed. ”

Another soldier confirmed that National Guard units were ordered on Thursday to leave Capitol Hill and deploy mobile command centers and operational headquarters in nearby hotels. The soldiers, according to him, were offered to rest in underground garages.

Some military members said it stemmed from complaints from some members of Congress that some soldiers resting from duty and sleeping in corridors on the Capitol did not always wear masks and thus put lawmakers at risk.

Senate Democratic Majority Leader Chuck Schumer called reports of National Guard “evictions” out of the Capitol buildings outrageous, adding that he does not know where the troops are now being deployed.

“If this is true, then this is outrageous,” he tweeted. “I will definitely figure this out.”

Republican Elise Stefanik of the House of Representatives called the decision “completely unacceptable.”

In turn, Senator Martin Heinrich said on Twitter that he is ready to provide his own office to accommodate military personnel.