NewsAlarmsGlobal Trends and News
BlockchainETH back towards $1400,BULLISH ON ETH Strong enough to... 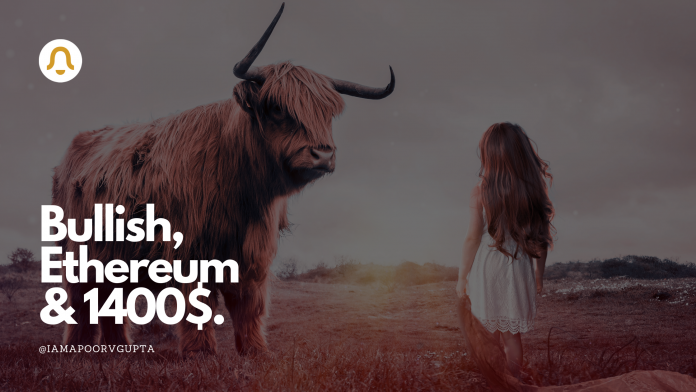 The queen of cryptocurrencies was on a roll as it broke the norm and picked bullish momentum despite the king being majorly bearish. However, the queen could not sustain the bullish momentum and is back to following the king. In the daily price charts, Ethereum is following the movements of Bitcoin closely. The 24-hour high for Ethereum was $1,389, while the 24-hour low was $1,196. At the time of writing, Ethereum is trading hands $1,251 apiece.

Ethereum price prediction: What to expect?

Analyst trading Axis has identified a harmonic bat pattern in their Ethereum price prediction. The reversal and continuation formation are indicative of bullish biases. The analyst has also pointed out a harmonic ABCD formation, which also points towards future bullish momentum.

As Per the analyst, once the bat formation is completed, Ethereum can break out towards the price level of $1,300. Towards the end of both the bat and the ABCD formation, the analyst expects Ethereum to encounter a strong support structure. The support structure ranges from $1,147 to $1,181. The analyst believes this can be a good opportunity to buy Ethereum as technical indicators signal a bullish market sentiment in the coming days.

Analyst Project Syndicate is pessimistic about the future outlook of the cryptocurrency in their Ethereum price prediction. Bearish pressures have overtaken Ethereum after it skirted close to the possibility of establishing a new all-time high. The analyst strongly believes that Ethereum is under major corrections – at least in the short term.

Suggesting a short position to traders in his Ethereum price prediction, the analyst warns of huge losses in the market that are to come. Per the analyst, the cryptocurrency re-tested its all-time high, and after failing, it is now dumping. The analyst expects a target price of nearly $1,000 from the cryptocurrency as it retests the support level at $1,000.

Share
Facebook
Twitter
Pinterest
WhatsApp
Previous articleFor two weeks, the soldiers guarded the Capitol and slept there. And now they were kicked out into the street
Next articleIsrael has questioned the claimed effectiveness of the Pfizer vaccine