Consensus and the blockchain 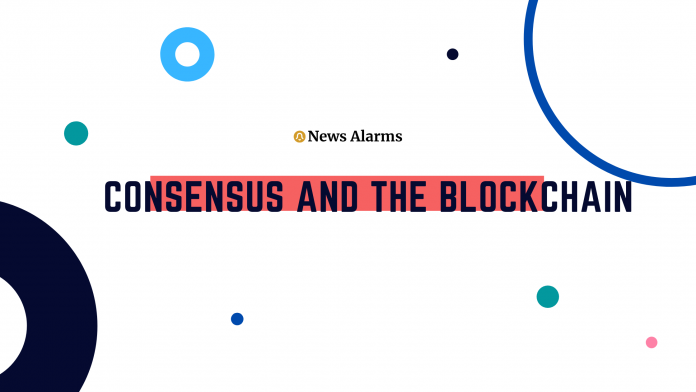 In this chapter, I will try and explain how cryptos work (at least in their basic form) in an easily understandable way. If you’re not interested you can skip this part and go directly to Smart Contracts although I’d recommend at least having a basic understanding of what you’re investing in.

As mentioned in Chapter 1: What Are Cryptocurrencies? two of the defining characteristics of cryptos are their security and immutability. But how do they achieve that? Centralized organizations spend large amounts of money on maintaining their security. Despite this, not only are they still vulnerable from outside forces, but they are especially vulnerable to inside forces. If someone has the right keys they can abuse their power for their own benefit. It isn’t comforting to think that all that’s preventing this is a moral conscience or a fear of being caught. With cryptos, this becomes irrelevant as nobody has all the keys. Instead, individuals numbering from the hundreds to the thousands collectively own the keys and are not only rewarded for obeying the rules but penalized for attempting to break them. Let’s look at how this works with an analogy.

Imagine a simple bank where people can deposit their money for safekeeping. The bank writes down all the transactions in a ledger so as to keep track of everything. Unfortunately, a clever thief breaks into the bank’s office and makes some changes to the ledger so that when they go to withdraw their money the next day the somehow have more than they deposited. The bank checks his ledger and everything seems in order.

Now imagine a second situation where we have a bank with 11 different branches. None of the branches trust each other so they come up with a system. Each one decides not only to keep a record of their own transactions but to send a representative to every other branch to independently write down every transaction their colleagues make. This way if there’s a dispute the branches can compare their ledgers and decide by the majority which one is correct. But there’s still a problem: when the representatives are on their way between the branches to compare ledgers they are attacked by the thieves and the ledgers of more than 6 branches are changed. So they add an additional step: at the end of every page of the ledger the banks will put all the values of the transactions from that page into a complex equation and write down what they get in a document for safekeeping. At the end of the next page, they will add up all the values again but also use their answer from the previous page. How does this help anything other than making things more complicated?

Now when a band of thieves attacks the representatives they not only have to change the entries but make sure that the changes they make still give the same answer when they’re put into the complex equation. This takes the thieves a long time, several weeks in fact. Long before that point, the bank realizes something is wrong and takes out one of the many copies of the ledger.

There is actually one more thing which makes the system even safer. To stop the bank from colluding against their customers the branches are offered a reward every time they agree with the majority of the other banks if they are in the minority they are fined. It turns out to be much more beneficial for the branches to play by the rules than try to break them.

In the next section, we will see how this analogy relates to “the blockchain” (the system of ledgers) and the differences between consensus methods.

Below is a very good instructional video from Ivan on Tech explaining this in a slightly different context. This problem is commonly known as “The Byzantine Generals Problem”. His channel is a very informative and objective look at cryptos for those of you who understand the basics.