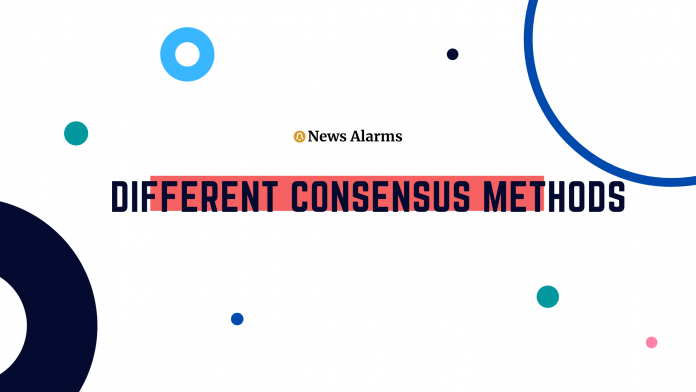 In the previous example, we saw that there were competing branches. The “nodes” or “bookkeepers” in cryptos can be thought of as these competing branches. Every time they fill out a page in their ledgers they cross-reference it with everyone else’s ledgers. The “blocks” in the blockchain can be thought of as the pages. Finally, the complex equation they have to solve with the value of the transactions on the page is called hashing and is much harder to do in reverse (as the thieves were attempting). So what is the benefit of being a “node”? Well, every transaction that’s carried out pays a fee to the nodes for processing it and ensuring their security. The fines we talked about in the bank analogy depend on the consensus method, of which there are many types. I will discuss the most important/popular ones below:

Proof of work was the first method of ensuring consensus and the most widely used. In order to finish a page or “block” a node has to figure out a really complex math equation. The only purpose of this math equation is to make sure the node works really hard and uses a lot of electricity. In return the node is awarded some currency for figuring it out, known as a “block reward” plus the transaction fees. This is known as “Mining”. The nodes in PoW can choose to do this be becoming “Miners”. For more details on mining CLICK HERE(Coming Soon). If a miner gets a different answer to the other miners their answer will be rejected. The miners don’t want to waste money on electricity for nothing so they are incentivized not to lie. In this way the only method of cheating the system is by controlling 51% of the ledgers, or more correctly, 51% of the computing power. Even then it is extremely difficult to change past transactions and impossible to change transactions after several blocks. A miner with 51% of the power could potentially prevent transactions from confirming and reverse transactions he makes but given the amount of capital investment required it doesn’t make economic sense to attempt this.

The more computing power a node has the more likely they are to guess the answer to the equation first before the other nodes and net themselves the block reward. It is common for many users to pool together their resources into a conglomerate known as a “mining pool” in order to have a more consistent income.

The “Block difficulty” is how difficult the math equation is to solve. If blocks are taking too long to solve then the difficulty is reduced, if they are being solved too quickly then the difficulty is increased. Block timing determines how often a new page of the ledger is used. So if the size of the pages remain the same and you have a lot of transactions, a lower block time can help deal with that. However, there are technical security risks with having lower block times if there aren’t enough transactions.

Cryptos that use PoW:

PoW uses the cost of electricity as a way of penalizing nodes trying to cheat the system.

In proof of stake there is no mining. Instead one node will be chosen and simply process the transactions without needing to solve any complex math puzzle.  The other nodes will verify the block. In order to penalize any attempts at cheating the nodes must lock some of their currency in a virtual safe and this stake will be forfeited if any funny business is detected(This system is called Staking and can be thought of as similar to mining for PoW but without the large electricity bills). The more currency you stake the more likely it is you will be chosen to create the next block, therefore the more you have to lose if you try and cheat.

Cryptos that use PoS

PoS takes your currency if you try and cheat the system

Users must stake a fixed amount of their currency to become a node. The likelihood of their node being chosen to create a block (and claim the fees) depends on their “Importance Score” which is determined by how much you use the network. Sending large amounts of currency frequently will keep your importance score high.

Cryptos that use PoI