NewsAlarmsGlobal Trends and News
BlockchainList Of Top dApps On Ethereum To Try in...

List Of Top dApps On Ethereum To Try in 2020 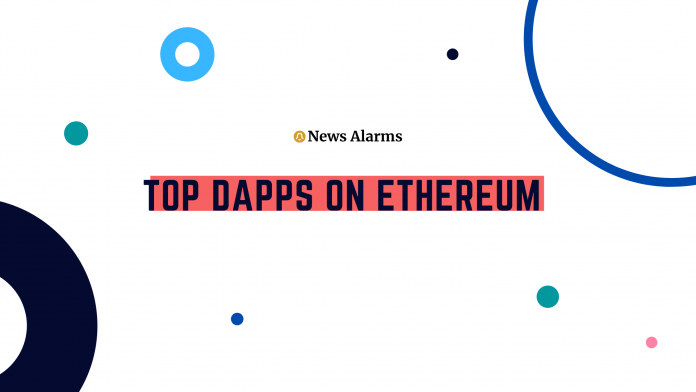 Imagine having your car working away, transporting passengers while you’re at work. Imagine having your computer utilizing its spare capacity to serve businesses and people across the globe. Imagine being paid for browsing the web and taking ownership of your, arguably invaluable, attention. Imagine a world like that. That world is not far away.

A paradigm shift in the way we view software models is approaching. When Bitcoin, the first cryptocurrency, made us reassess our definition of Store of Value (SoV), it also revealed a sneak peek of the future: a world running on decentralized applications (Dapps). These distributed, resilient, transparent, and incentivized applications will prove themselves to the world by remapping the technological landscape.

What is the meaning of dApp?

The term “dApp” is an abbreviation for decentralized application. These applications look exactly like any other app on your mobile device. The difference between an app and a dApp is that the backend of the latter runs on a decentralized peer-to-peer (P2P) network instead of centralized servers.

Just like regular apps, the frontend of dApps can be written in any language. As for hosting, dApps can opt for decentralized storage, such as Swarm or IPFS. While many of us still haven’t tried dApps, they can be easily downloaded from Google Play or App Store.

What are dApps used for?

As mentioned above, dApps are a lot like regular apps on your device. That said, dApps can be used for any purpose. From casino games to token swaps to search engines, there are no limits for what dApps can do. However, it’s important that regardless of its purpose, it incentives the usage of the application through digital tokens. After all, that’s an essential part of a decentralized application.

Is a smart contract a dApp?

No, a smart contract is a computer protocol that automates the execution of agreements between the multiple parties without the interference of intermediaries. In other words, smart contracts are lines of code that allow contracts to self-execute when certain terms and conditions are met.

Not long ago, blockchain was a synonym for Bitcoin. Today, that’s no longer the case. As developers found out additional use cases for the distributed ledger technology, like dApps and smart contracts, numerous companies started to develop their own blockchains. So… what’s the best platform for blockchain dApps?

This blockchain hardly needs an introduction. Released in 2015 by Vitalik Buterin, this open-source distributed computing platform has gained huge popularity as many decentralized projects issued tokens on top of its blockchain. Over the years, Ethereum’s multiple protocols have given birth to over 2000 dApps, including well-known Cryptokitties, IDEX, 0xUniverse, among others.

The increasing number of applications depending on this blockchain has certainly helped Ether (ETH) to become one of the strongest cryptocurrencies by market capitalization. Overall, Ethereum is solid choice for launching a decentralized application, although it has one big disadvantage: fees. The Ethereum network works with a Proof-of-Work (PoW) consensus algorithm, which consumes plenty of computational power. At the end of the day, that computational power translates into high fees.

Whatever product goes out, a cheaper (and sometimes better) Chinese version follows. This rule also applies to blockchain. NEO, also known as the “Chinese Ethereum” has recorded a top speed of 2400 transactions per second and on average processes 400 TPS. Compared to Ethereum’s 15 TPS, this network offers decentralized applications an environment geared for scalability.

While NEO is able to handle a higher number of transactions, it charges high fees. In some cases, even higher than those charged by the Ethereum network. At the moment, there are nearly 75 dApps based on this blockchain.

Despite being one of the newest players, TRON is already seen as a true “Ethereum Killer” due to its ability to offer high speed, massive scalability, and low fees. This blockchain has gained its popularity as a go-to choice for many crypto gaming and gambling sites. In terms of transactions, TRON processes about 300,0000 transactions per day, making it a suitable platform for high-volume gaming decentralized applications.

Released in January 2018, this relatively new blockchain has become a real threat to Ethereum as it deals with over 50,000 daily users, three times more than Vitalik’s platform. Again, the promise of this platform is around the same points aforementioned: transaction speed, throughput, and low fees.