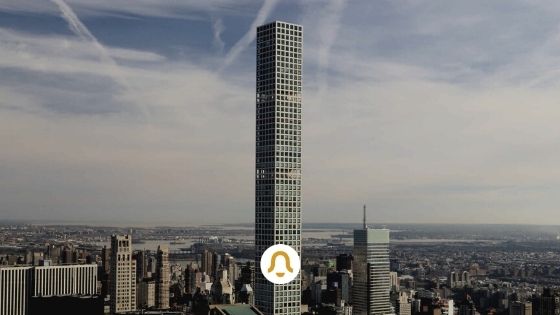 Park Avenue 432 was offered as a luxurious skyscraper with many amenities, but it resulted in several problems.

One of the most luxurious skyscrapers in the world is located in New York City . Exactly, at 432 Park Avenue , a tower almost 426 meters high with 147 apartments. This building became the tallest residential tower in the world in 2015, a time when luxury condominiums were booming, after cultivating this industry for more than half a decade. Mainly for the interest of foreign buyers who were looking for the benefits of this offer.

Some of the buyers of Park Avenue 432 , the name by which this skyscraper is known , were famous celebrities who sought the discretion that this building offered, as well as some investors who later came to sell it Among the list of tenants is the Saudi tycoon Fawaz Alhokair, Jennifer Lopez, and Alex Rodriguez, to name a few examples.

The construction is located in the buildings of the island of Manhattan , and was offered as a luxurious skyscraper that had its own movie theaters (something that in a pandemic could be appreciated very well, since there are people who want to rent their own room ), golf facilities, library, views of Central Park, private restaurants, club, gym, swimming pool, sauna and meeting rooms. Most of the apartments were luxury, with 1 to 6 bedrooms. Also, some floors were reserved as attics.

For being a residential building, it was crowned as the tallest residential building in the world, in addition to the second tallest building in New York (after One World Trade Center) and as the fifteenth in the world. In fact, the building is so tall that its construction required approval from the authorities responsible for aviation in the United States. And getting on these lists is not easy, as New York has a long tradition of building surprisingly tall buildings, even in times of pandemic.

But not everything was as they imagined …

Although the offer of this skyscraper sounded really tempting, it had several problems that over time began to manifest themselves until it became a nightmare for its tenants and owners.

The building designed by Rafael Viñoly, who has also designed airport terminals that are a luxury, was a fiasco in terms of its amenities. Park Avenue 432 has elevator issues, flooding, and terrifying creaking sounds in its structure. For example, in 2019 a resident was trapped inside an elevator for almost an hour and a half. In addition, due to the flooding, tenants have repeatedly had to suspend the use of the elevators, something that is naturally impossible due to the height of the building, making them wait in lines to be able to climb the only two available elevators.

The owners also complain of loud noises that resemble a ship at sea, as they have told newspapers such as The New York Times , as they represent blows to their houses, probably due to the metal partitions that move or the air that hisses through the elevator shafts. And if that weren’t enough, sometimes the wind is so strong that it makes the whole building move. “On days with winds of 80 kilometers per hour, a tower of this type can move approximately 15 centimeters. In the rare case of 170-kilometer-per-hour gusts, this structure could move up to 60 centimeters, ” The New York Times reported .

Complaints about the malfunction of this skyscraper were kept secret for many years. And is that the owners face a complex dilemma in this regard, how to continue with their complaints without discrediting the value of the building? If one day they want to sell their property, it is not convenient for them to know all the faults it has … although it may be a little late for it.