NewsAlarmsGlobal Trends and News
NewsApple Watch: Joe Biden wears it in the Oval...

Apple Watch: Joe Biden wears it in the Oval Office 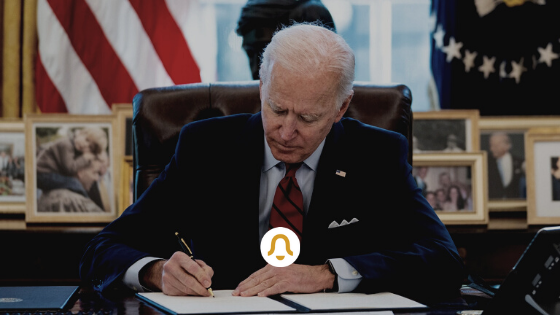 He took the oath of office with Rolex. In everyday life, however, the new US President Joe Biden relies on the Apple Watch – and thus possibly sends a message to the voters.

Joe Biden stays true to his Apple Watch in the Oval Office. It flashed as the new US president signed a series of orders during a photo op on January 28, 2021. Biden had celebrated the inauguration with a Rolex Datejust on his wrist. In everyday government business, however, he obviously appreciates it when his watch can do more than tell the time. ( Read about this: Joe Biden – with this Rolex he celebrates his new position)

Biden probably bought the silver Rolex with black dial especially for the festive occasion. With the Apple Watch, on the other hand, the old model with the same black bracelet seems to be sufficient in the Oval Office. With this, the democrat is writing a piece of watch history. “Biden is the first US president to wear an Apple Watch,” our colleagues from the US GQ stated. From their point of view, this choice is symbolic in other ways: “It is nothing new for a president to send a message with his wristwatch.”

One example is the Vulcain cricket. She woke some of the most powerful men in history, including Lyndon B. Johnson, Harry Truman, and Dwight D. Eisenhower. The “Grille” was one of the first wristwatches with an alarm function. So even with a spontaneous nap in Air Force One, she could make sure that the head of government was up in time for a meeting. In addition, there was the symbolic value, believe our colleagues: The watch showed the voters that this President is always on time.

Apple Watch as a symbol

“The Apple Watch says something similar, namely that a phalanx of advisors is not enough,” that an important email can depend on a fraction of a second when the president reads it. Eric Wind, an expert on presidential watches, told GQ in November 2020: “I think most political style advisors would advise wearing something very cheap like a Timex Ironman or an Apple Watch to show that you are on the is up to date. ” Biden apparently came to the same conclusion. ( Also interesting: Joe Biden, Commander in Style – his best looks for after-shopping )

It has long been known that Biden is one of the fans of the smartwatch. In the past few years, Barack Obama’s former vice-president has repeatedly shown himself with the Apple Watch. The smartwatch was prominent in the picture when visiting the celebrations for Independence Day 2019 in the town of Independence in the US state of Iowa.