NewsAlarmsGlobal Trends and News
BlockchainBlockchain GuideBitcoin (BTC) and cryptos: what is ATH?

Bitcoin (BTC) and cryptos: what is ATH? 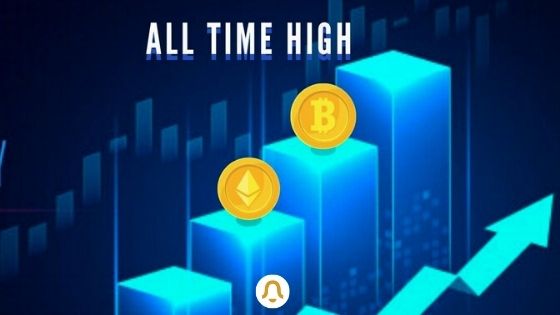 ATH is an English abbreviation of the term “all time high” which can be translated into French as “plus haut historique”. However, we hardly ever find the French version even on French-language media.

There are various reasons that can cause a cryptocurrency to reach its all-time high in terms of value and it is important to understand them well in order to know how to react correctly when the digital asset in which one has invested, or on which one wishes. invest money, reaches this value.

Also Check: Bitcoin (BTC) and cryptos: what is ATL?

When can a cryptocurrency reach its all time high?

A digital asset can reach its all time high when it has succeeded in delivering all of the promises (or most of it) that it has made to its investors and they decide to buy more tokens from this project. This usually results in an increase in its value because so many people want to own only project tokens and the demand is limited.

Sometimes it is also possible for a token to reach its all-time high while in a bull run period. During these particular phases, just about any digital asset is likely to see its value explode as the euphoria is high and investors are able to put their money into just about anything.

It is therefore important to check which of these two reasons pushed the price of a token to its ATH, the first being generally a sign of the quality of the project, while the second being rather a sign of irrationality. of the market.

Note that the all time high can be calculated in two different ways. The first, in terms of dollars (or any other fiat currency) usually happens during a bull run period. The second way to calculate the ATH is in satoshis, that is to say in relation to Bitcoin. Usually, when the all-time high is reached in satoshis, it means that the project tends to live up to its promises.

Should you sell when a digital asset has reached its ATH?

When investing in cryptocurrencies, it is generally to hope to obtain an interesting return on investment. Is it therefore necessary to resell when the digital asset in which we have invested reaches its ATH?

In most cases, this is usually the best thing to do if you are not an expert and do not know inside out what project you have invested in. However, we must be aware that the digital asset can still increase in value and continue to appreciate in the future.

Therefore, we recommend that our readers instead resell in stages. For example, you can resell a small percentage of your investments when the value of the token reaches a certain price that you set in advance. The ideal is to spread all this in several stages, generally ranging from 4 to ten depending on the investors.

If you really believe in the project and are certain that the token will continue to rise in value, then you can keep some of your digital assets. However, we strongly advise against keeping all of your tokens and we invite you to recover at least your basic investment. As the saying goes, trees do not rise to the sky.

ATH is the highest value that a digital asset has reached during its lifetime. It can either be calculated in a fiat currency, or against bitcoin. When a cryptocurrency reaches its all-time high, it is advisable to be very careful to want to invest in it because the potential for future growth becomes less important.

It is always important to do your own research before investing in a project and to cross your sources. If you are having trouble finding information on a cryptocurrency that has just reached its ATH, then we recommend that you do not invest in it and look for a better opportunity with another project.