Towards a decentralized financial ecosystem: The DEFI 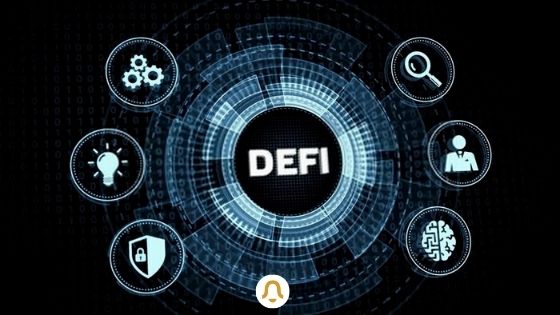 Today we are witnessing the creation of a new digital financial ecosystem, with new financial players, new investments, new technologies, without intermediaries… Welcome to the decentralization of finance, in other words DeFi!

What is DeFi? The Challenge, short for “  Decentralized Finance  ”, is a term that defines decentralized finance. DeFi is based on the mechanisms of the Blockchain, in order to allow users to keep their funds in their own personal wallet, or digital wallet, according to the applicable rules and to make transactions directly from user to user, without intermediaries, via digital contracts, known as “Smart Contracts”, on the Blockchain network. Lots of jargon for one definition! Let’s take the terms one by one in order to understand the logic of DeFi

What is the Blockchain? Blockchain, in other words “block chain” in French is a technology allowing the storage and transmission of information and / or transactions on a public digital system, in other words: a global database shared between several users .

And in practice, how does the Blockchain work?  In practice, when a user wishes to carry out a transaction, through the Blockchain network, this transaction request is grouped with other similar transactions within a block. The authenticity of each transaction is then verified and validated by the members of the network (“peer-to-peer”) using cryptographic techniques , to ensure confidentiality between the sender and the recipient.

Once validated, the block is encrypted, time-stamped, and added to the chain of blocks: the Blockchain. The operation then becomes public and accessible to all network users. But beware ! Transparency, anonymity and immutability being the key elements of the Blockchain, this transaction can never be modified or deleted from the Blockchain, even in the event of an error.

However, a rectification is still possible by adding a new block, a new transaction, within the Blockchain. In order to better understand this system, I invite you to refer to the diagrams below:

Speed, transparency, cost reductions , here are some advantages that are attracting more and more users to decentralized finance. Since the start of 2020, the value of digital assets deposited in digital contracts of DeFi projects has increased exponentially to exceed $ 197 billion in early October 2021!

While it is clear that the decentralized technologies introduced by the Blockchain, cryptocurrencies and smart contracts are changing the codes, opportunities, responsibilities, types of investments, rates of return and individual management of taxes, decentralized finance , like the internet, is no longer a lawless area, despite the absence of a central authority. Indeed, the past has shown that no project could escape the regulator and that no user was immune from the tax authorities, whether it was Telegram Group and its Gram tokens , The DAO for ICOs, from Libra for stablecoins or more recently, from Bitmex for derivatives, Crypto fines imposed by regulators in the United States alone have totaled more than $ 2.5 billion since 2009.

According to Gary Gensler, chairman of the United States Securities and Exchange Commission (SEC) :

Indeed, there is a certain centralization behind DeFi projects due to their type of economic and financial activity, and in particular due to the fact that DeFi projects reward participants with cryptocurrency tokens. It will now be necessary to pay attention to this centralization which could fall within the competence of the regulators. Since corruption is the main enemy of any innovation, the role of regulators is to provide some basic protections against fraud, manipulation by investors and the general public.

Therefore, when you operate in the crypto field, it is strongly advised that you secure the support of legal advice and to verify the ethics of your strategies, in order to remain in compliance and to avoid such sanctions. This compliance will also help you gain the trust of your customers and partners. However, how to recognize the applicable regulations in a decentralized world without geographical borders?

The biggest legal issue is undoubtedly legislative inflation . Indeed, each country has its own rules of law and if we have customers from several different countries, we are obliged to respect the rules initiated by each country of each customer, and therefore to obtain a different regulation for each country, which generates enormous costs: financial and temporal.

It is high time for regulators to work together on a harmonization of decentralized financial law. Indeed, the particularity of digital networks and decentralization stems, as has often been stressed, from the global dimension and the absence of geographic borders.

Recently, on September 24, 2020, Europe took the plunge by updating the proposed regulation “MiCa” ( Markets in Crypto-Assets, “Marches de Crypto-Actifs” ), which should come into force soon in 2022. By preparing its regulation on Blockchain, cryptocurrencies and their service providers, the European Union wishes to harmonize the regulations of its various member states to avoid confusion and competition between states. Through this regulation, the European Commission takes note of the existence of crypto-assets and digital tokens with the aim of “establish a European framework that allows both the creation of crypto-asset markets, the tokenization of traditional financial assets and more massive use of Blockchain in financial services ”. Through its text, the European Commission also wants to create a new agency, “  Anti Money Laundering Authority  ”, to crack down on money laundering and establish new transparency rules for crypto-asset transfers.

France had also already started to put in place a regulatory framework for crypto-assets through the PACTE law of 2019.. However, the main difference between the European text and the French text is the publication of white papers for all token issuers. For those who do not know, the principle of a white paper is to increase transparency by offering potential customers: a description of the tokens, their usefulness and how they work. A bit like a label on a consumer product that tells us what the product contains. On this point, European regulation is more restrictive than the French approach because it requires the approval of White Papers by regulators BEFORE the issuance of new tokens. In addition, it will also be necessary for the issuers and exchanges of crypto-assets to obey a series of rules ensuring their financial stability and good faith.

DeFi being better defined, as well as its operating mechanisms via Blockchain, and the legal issues related to the regulation of such a network, it is now necessary to define the “Smart Contract”: a digital contract allowing the execution of transactions on the Blockchain network.

What is a Smart Contract?  A smart contract, written in computer code, is in a way the digital version of a traditional contract.

The purpose of the smart contract is to legally bind those who participate in it in order to automatically perform commitments between several parties, when the required conditions are fully met. To do this, each smart contract and each party to the smart contract have a unique IT address. These computer addresses allow the parties to collect and add information that will feed into the smart contract. Smart Contracts are used on the Blockchain network, mainly the Ethereum Blockchain, when users wish to carry out transactions directly from user to user, for example to receive and / or send money in cryptocurrency.

The question arises as to whether such digital contracts can completely replace traditional contracts or whether the presence of traditional contracts remains necessary? Smart contracts are for the moment executed only on extremely simple logical bases, that is to say a computer code responding to a situation: ” If – When – Then“. Due to their simplicity, smart contracts are rarely used to automatically process more complex data. In addition, since this contract goes through the Blockchain, it cannot be modified, deleted or canceled if the conditions do not provide for it in advance. Indeed, if a court can cancel a traditional contract when it turns out that one of the parties did not have the capacity to contract, the thing is impossible on a Blockchain if the cancellation condition has not been provided for. initially in the computer code of the smart contract.

Therefore, when writing a smart contract, it is essential, as soon as the code is written, to take into account ALL the variables to be analyzed and the exact obligations of each party: because once the program is launched, the computer code will be immutable.

The need for close collaboration between Lawyers and Computer Programmers

In the years to come, the evolution of Smart Contracts will undoubtedly require close collaboration between lawyers and computer programmers to verify the proper execution of each person’s obligations before validating the ultra-precise architecture of a smart contract. Indeed, in the event of a computer failure or cyberattack, it will also be necessary to provide for jurisdiction in the law applicable in the event of a dispute, or the drafting of a traditional contract containing everything that cannot be translated into a computer code. From now on, law and technology will have to combine to form one, in order to move forward towards a new world reconciling the material and the immaterial, thus becoming together, figures of the era of time.