The disturbing exorcism movies based on real cases 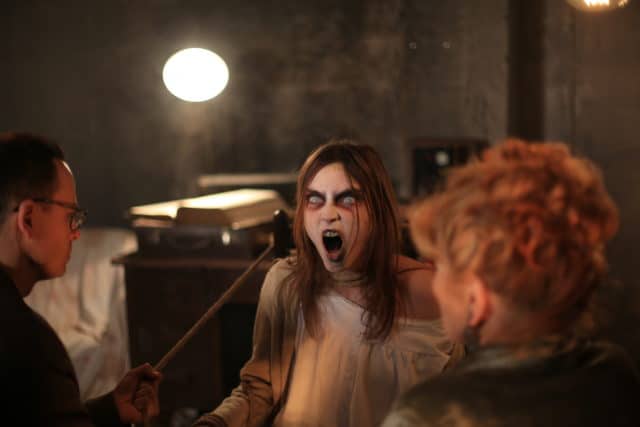 The films of exorcisms and possessions are nothing new, every year a new one appears and presents an even more brutal case than the previous ones, but, despite the fact that there are many, they are films that continue to make us tremble with fear (irrational and uncontrollable) with just think of his most macabre scenes.

Why? Well, because many religious beliefs assure that possessions are possible, that spirits and demons can really enter your body and control it as they please when you least expect it, and, although there is no scientific data to prove it, the possibility, for more Small as it is, it adds a realistic touch to the movies that turns even the bravest legs to jelly.

And these are not friendly spirits who just want to use you for a while to say goodbye to their relatives (something like in Ghost with Demi Moore and Patrick Swayze ), in horror movies, they are always evil and violent spirits that turn the bodies of their victims in a mass of bumps, cuts and bruises that make them look misshapen and terrifying (like Regan’s face in The Exorcist ).

And how is a demon cast out? It is not easy, it takes an expert exorcist who has the strength, stamina and conviction to spend hours, days or weeks working with the victims to save their souls, and the most brutal thing is that, even with that, there is no guarantee that things are going to end well.

We don’t know why someone came up with making movies of exorcisms and satanic possessions, but they exist and they are addictive (yes, we all like to torture ourselves a little, it is impossible to deny it), even when we know that we are going to spend days full of paranoia and nights watching the corners of the room to make sure nothing lurks from the shadows.

The exorcism movies that have real stories:

Directed by William Friedkin, the film tells the story of a girl named Regan who is possessed by various demons, so her mother calls two exorcists to try to save her before it’s too late.

The Exorcist was one of the scariest movies of the 70s, and of history, and is inspired by the true story of a boy possessed by demons that left marks on his body. The boy’s name was Roland Doe , his case happened in the 1940s and it is said that he became possessed after playing with a ouija board.

The church performed an exorcism on him , but that only made matters worse, and it was months before Roland was freed, not before leaving one of the priests with a broken nose. Some experts believe that Roland was simply suffering from mental illness, but no one has been able to prove it.

The case of Emily Rose is also one of the scariest in cinema. The Scott Derrickson-directed film is based on the story of a German woman, Annelise Michel , who underwent an exorcism in 1975.

Annelise died a year later for lack of proper medical care, leading to her parents and the priest being brought to trial for murder, alleging that Annelise , who was dehydrated and malnourished, did not need an exorcism, but a hospital, anymore. who suffered from epilepsy and depression. Her family were convinced that she was possessed by demons and even produced a recording of the woman speaking in strange voices and in unknown languages ​​as evidence.

The Andrew Douglas- directed film , starring Ryan Reynolds , has one of the most grim stories. This is the story of a family who, just a few days after moving into their new home, ran away in the middle of the night and never returned.

That is the true story of the Lutz family, who bought the house in which Ronnie DeFeo murdered his entire family on the orders of “voices” that tormented him. The Lutzes said that strange things happened in the house and that they even saw the ghosts of the DeFeo, so they had to flee for their lives.

The film Ken Russell was inspired by the case of the Catholic priest Urbain Grandier of the seventeenth century and possessions of Loudun. Grandier was convicted of witchcraft and burned at the stake after he was said to have bewitched a nunnery. The women spoke in strange languages, yelled, made obscene gestures at the men, and claimed they were pregnant and possessed. Thousands of people attended the public exorcism of the nuns.

At the trial and execution, the priest insisted that he was innocent to the end and it is believed that it is possible that due to his reputation and his various relationships with women related to the royalty of Loudun, they could be a reason for Grandier’s conviction.

Directed by Wes Craven , the film follows an anthropologist who travels to Haiti to investigate a case of black magic that turned people into zombies. The film is based on a book by the ethnobotanist Wade Davis, who studied the case of a man named Clairvius Narcisse, who allegedly rose from the grave and returned home almost two decades later.

Davis’s book said that Narcisse was poisoned by his brother with puffer fish and toad venom, which made it look like he was dead, then he was buried, quickly dug up, and given Datura, causing him to lose his memory. Narcisse said he worked on a sugar plantation as a slave and, when his slavers died, he was finally able to regain his memory and went home. Voodoo practitioners claim that everything was the work of black magic.

Produced by Sam Raimi , the film follows a girl who is possessed after opening an ancient cursed box.

The film is based on an old story about an object called a dybbuk box that held the spirit of a Holocaust survivor . The box that was sold on ebay and contained coins, hair, a Hebrew phrase, wine and a dried rose. Several owners of the box reportedly reported experiencing supernatural events, including dire nightmares, inexplicable smells, and exploding light bulbs. In addition, director Ore Bornedal reported that strange things also happened on the film set, including a fire.

After that, the box was supposedly sealed by rabbis and hidden in a secret location so that no one can open it again.

Martin Scorsese called this Peter Medak movie one of the scariest ever, and it tells the story of a writer who is harassed by a spirit living in his isolated mansion.

The script is supposedly inspired by the time writer Russell Hunter spent living at the Henry Treat Rogers mansion in Denver, Colorado. Hunter said he was drawn to the Rogers estate because of its impressive architecture and low rent, but once there, he began hearing unexplained noises, witnessing poltergeist activity, and discovered a secret room and a diary (written by a child who was reportedly trapped there), which convinced him to turn to a medium.

The house was demolished in the 1970s and a bulldozer operator is said to have been killed in an explosion, and the ghosts followed Hunter to another residence.

The saga of The Conjuring , by James Wan , is inspired by the story of Ed and Lorraine Warren , two supernatural researchers who, supposedly, found different cases of satanic possessions of people and objects in their travels in the United States.

The Warrens even have a museum full of objects from the occult that have been connected to cases of ghosts, possessions, and unexplained events, such as the true story of the Annabelle doll .