NewsAlarmsGlobal Trends and News
EntertainmentCelebritiesAngie Lee's "Pays to Be Brave" Conference Started with...

Angie Lee’s “Pays to Be Brave” Conference Started with a Handful of Attendees. Now it attracts Thousands of Women 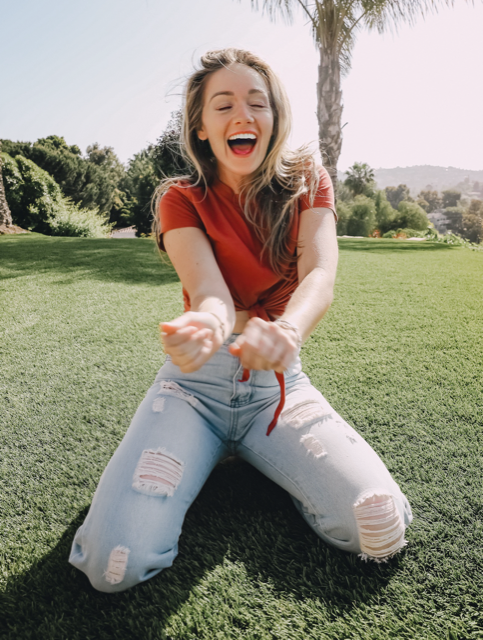 You may have heard of Angie Lee by now – her wildly popular podcast, The Angie Lee Show, has yielded over 10 million downloads and counting, and she’s amassed an Instagram audience of nearly 100,000. But she has another love, too – event planning. Every year (with an exemption of this year due to social distancing guidelines) Lee hosts her Pays to Be Brave conference in her hometown of Chicago. This conference provides a space for her podcast listeners and community at large to come together and be inspired to start on their dreams or businesses right now. It gives them the bravery to do it – even when they’re scared.

If you’ve ever seen footage from the conference (Lee shares videos frequently on her Instagram page), you’ll see a large event space with hundreds – even thousands – of women. They’re dancing to pump-up music, internalizing profound messages, and networking. From the outset, it looks like Lee had this following all along, and that the magic of her events comes from the sheer number of attendees and the undeniable electricity in the room. But this is far from how Lee started.

“My very first events were just a handful of women,” Lee told me when we sat down to talk about her evolution. “I would negotiate with yoga studios to let me use their space, offering them deep dish Chicago pizza because I didn’t have the budget to pay a rental fee. And it would just be a small handful of us.”

The Necessity of The Beginning

Many event planners hope to reach these attendance numbers and to create an event of this magnitude when they’re just starting out on the first go. It’s great to keep your eye on the prize, but it’s also important to know that every person and every company goes through its fair share of growing pains. No one is an overnight sensation, despite media stories to the contrary. These growing pains aren’t thankless, though. They simply help you become the person you’re going to be, or help you make your company into what it’s going to be.

The inspiration in Lee’s story is just that: those first events, huddled in a yoga studio over pizza during a Chicago winter, became the sensation that Pays to be Brave is today. And as Lee says, you can’t “skip the middle.”

“So many wish they could just jump to hosting that conference that goes off without a hitch – the one that brings in hundreds of people and attracts press and grade A speakers,” Lee noted. “But there’s a messy middle we can’t avoid here. You have to be a beginner and you have to suck. There’s no way of getting around it.”

Lee likens the messy middle to, well, middle school. “We’ve got braces, we’ve got drama, we’ve got our first boyfriends, and no one wants to go through it but you simply have to!” she laughed. No one ‘skips’ this middle phase. Might as well charge through it!

How to Just Get Started

Now that Lee looks back, she’s grateful for the small nature of her early conferences – if anything, because they provided immense learning opportunities. “I think we attract what we’re ready for,” she reflected. “I used to get so nervous I’d almost pass out or run offstage in front of just 100 people. It’s about slowly stepping out of your comfort zone, little by little,” she shared. “At that time, that was all I could handle. I honestly can’t imagine starting where I am today. I don’t know if I could’ve handled it.”

This isn’t Lee being humble or even self-critical. It’s simply her acknowledging that our starting place is so important simply because we ourselves have to get ready. We may mentally believe that we can handle a large scale event or an audience of thousands (whether they be event attendees or followers). But we’ll never know that for sure until we do several ‘test runs’ with smaller audiences. First, make it impactful for those who show up. Then, and only then, can you figure out how to scale seamlessly.

So, start where you are now – knowing that as you grow, you’ll attract more event attendees and more “pomp and circumstance,” if you will. And, never ever disregard the value of those few people who DO show up.

This is how Lee credits not only her event growth, but the growth she’s experienced on her Instagram and on her podcast. “Just keep showing up, day after day, no matter who is in the crowd (literally or figuratively). Your dream depends on it.”

The youngest daughter of the great tech-guru and founder...
Entertainment

Developed by showrunner Lauren S. Hissrich with the literary...