The WandaVision soundtrack: your secret weapon 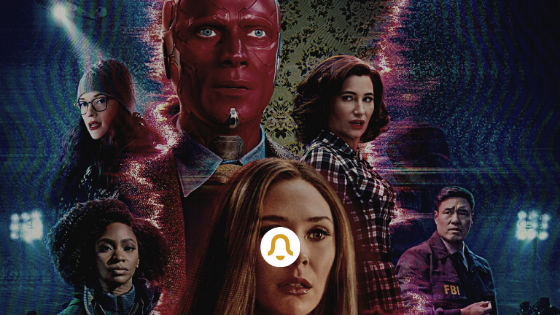 WandaVision is turning out to be one of the MCU’s greatest works, and the soundtrack was the ultimate weapon that no one expected.

* We will address many spoilers of WandaVision , so if you have not seen the series, we recommend reading this another time.

One of the defining scenes of WandaVision and that completely changed the light tone of sit-com towards one more focused on drama and action arrives at the end of episode 3, “Now in Color” . Wanda has just given birth to twins with the help of Geraldine (who we already know is Monica Rambeau ). The apparent neighbor asks something about Ultron , awakening a clear anger in the protagonist, who tells her to leave immediately. Monica shows up outside the town of WestView , very different from how we know it, and a whole team arrives with her.

At that moment, as if coming out of a loudspeaker, part of the rescue team plays the 1967 classic, “ Daydream Believer ” by the Monkees , an iconic North American band that defined the happy sound of the time and whose energy was perfect to evoke until the 70s. The theme fits with the spirit of the sit-com featured on WandaVision , but at the same time it seems to show a contrast between the seriousness of the situation and the concept. On the other hand, the lyrics – if we start to put on an aluminum hat – have a certain dark link that reveals more of the situation in a subtle way.

In other words, a ” daydream believer ” is a ” daydreaming believer “, and Wanda is just that , especially after the revelations of the following episode. What he lives is a dream and he is living it, with the belief that he can stay in that place (although perhaps under the influence of something else).

The use of the theme reminds us of other times when a happy song enters a dark context, generating a kind of contrary emotion in the audience, which makes it change direction. Suddenly the joy is false, or something else. In the 2002 film Adaptation , Spike Jonze uses The Turtles’ “ Happy Together ”, another classic from the 60s, in a dark context after a rather bitter ending, which makes everything that much more memorable. Legion , another Marvel series harnessed that element to the end with songs from all eras.

So far, the “Daydream Believer” seems to be a unique integration. However, a second song arrives in episode 4, “We Disrupt This Show, ” Jimi Hendrix’s “Voodoo Child” comes as a harder hit at the same time but in a different perspective. Monica Rambeau points out that all the illusion of the sit-com is made by Wanda and the guitarist’s notes begin to sound. A Voodoo Child has been described as a person with powers who can create and change the world. Once again, that’s Wanda . If we give it another meaning, as a “voodoo child”, it could also be Vision, being controlled by Wanda, when in reality he is dead.

We’d like to mention the addition of ” Yakety Yak ” from The Coasters, but its use was more for comic motive, as was the brief reference to the traditional song “Old Macdonald Had a Farm.” On the other hand, the work that has been done by Christophe Beck, the genius of the score for film and television, in charge of the music of several Disney films such as Frozen, to Ant-Man, who makes a perfect review of television times to those that it refers to, and even reaching contemporary drama.

WandaVision is really paying an unusual detail to each element within the series (those who pay attention to the dialogues will notice the infinite references that are made that Wanda is in a world created by her), but the soundtrack is turning into something interesting and makes us wonder, what song will we hear next? We will have to “tune in.”