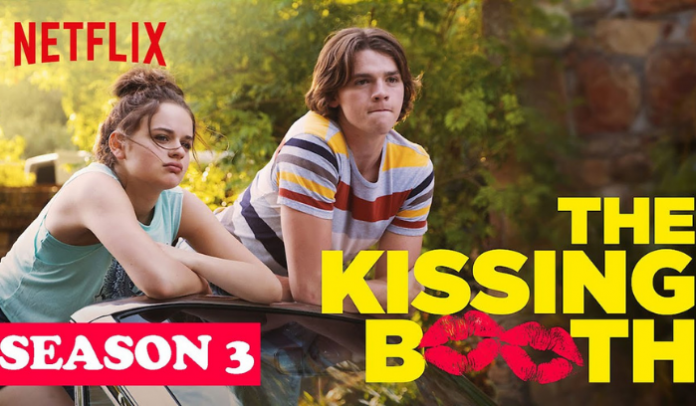 Just days after “The Kissing Booth 2″ debuted on Netflix, the company announced that there will be a third movie in the teen franchise. Here are all the details.

The premiere on Netflix of ” The Kissing Booth 2 “, known in Spanish as “The kissing booth 2″, was so successful that neither short nor lazy, the streaming company confirmed just a few days later that there will be a third party for put an end to the story of Elle Evans .

In principle, the sequel to ” The Kissing Booth ” follows the lives of Elle and Noah Flynn after a wonderful summer, when they must go back to school and go to college, respectively. Although they try to maintain a long distance relationship, they must deal with the temptations of the day to day as a handsome athlete or a college classmate. In addition, the relationship must once again deal with the jealousy of Lee, Elle’s best friend and Noah’s brother, to the point that the three must ultimately make a decision that will define the future of each of them.

Since the third film was announced, fans of the franchise starring Joey King, Joel Courtney and Jacob Elordi have been eager to learn more about “ The Kissing Booth 3, ” especially after the spectacular finale of the previous chapter.

WHAT WILL HAPPEN IN “THE KISSING BOOTH 3”?

The kissing booth will reopen sooner rather than later, as the second movie closed with a cliffhanger: Elle has yet to choose a college. When Lee said that he had been accepted to Berkeley, Elle replied that he was still on the waiting list of all the schools that he had applied to, but that was a lie.The teenager had been admitted by both Berkeley and Harvard.

In the third part of the streaming giant’s movie, Elle will have to make a decision that puts her, once again, in the middle of her best friend and her boyfriend.We will know the outcome of this situation, as well as the reactions of Lee and Noah after their decision. Also, in the finale of “Kissing Booth 2,” Elle and Noah reengage.

So the new story is expected to explore Elle’s freshman year of college. Young Ella may choose to travel across the country to Massachusetts, or Noah may end up deciding to move to Berkeley to be with his brother and girlfriend.

It is also possible that “The Kissing Booth 3″ takes place during the summer, which would allow the return of several minor characters. The end of the sequel shows that Marco has not fully accepted Elle’s rejection, so he can go back to trying to win her over in some way or another.

TRAILER OF “THE KISS STAND 3″

The third movie of “The kissing booth” does not yet have an official trailer, but it does have a first sneak peek.

You can also rewatch the trailer for season two to remind yourself of a few things.

WHEN WILL “THE KISSING BOOTH 3” RELEASE?

While Netflix has not provided further information on the release date of the new film, it is expected to arrive in mid-September 2021.

It is worth mentioning that “The Kissing Booth” was released in May 2018 and “The Kissing Booth 2” in July 2020. Despite the complicated situation in the world due to the coronavirus pandemic, Netflix wants to increase production, therefore, it announced that2021 will be the premiere date of the third part of the romantic comedy Based on the novel by Beth Reekles.

ACTORS AND CHARACTERS OF “Kissing booth 3″

Netflix confirmed that the full cast will be in the new movie “Kissing booth 3″:

“THE KISSING BOOTH 3″ WAS FILMED IN SECRET

After confirming that there will be a third part of “The Kissing Booth” , Joel Courtney revealed that this was already filmed in secret at the same time as the sequel. “It was the hardest secret to keep,” he said during a YouTube live broadcast with the cast.

Thus, the filming was verified and is complete and is currently in post-production. Likewise, it was confirmed that the entire cast, including Joey King, Joel Courtney, Elordi, Taylor Zakhar Perez and Molly Ringwald , will return for the third installment.

WHAT HAPPENED AT THE END OF “THE KISSING STAND 2”?

As ” The Kissing Booth ” progresses , everyone gets mad at Elle, some with good reason and others without knowing the truth. The first to get upset with her is Rachel, who asks Lee to talk to her best friend because she doesn’t feel comfortable sharing her boyfriend with her. However, Noah’s brother prefers to take the easy path and makes an excuse.

Since Rachel believes that Elle doesn’t respect their relationship, she confronts her and forces her to walk away. Without his best friend and with his boyfriend miles away, Joey King’s character gets carried away by his jealousy and insecurities and kisses Marco, so the second to anger at Noah, who returned for Thanksgiving and in time for competition.

Finally, Lee discovers that her best friend is looking for a different college than the one they agreed upon and gets angry with her. During the family dinner, everything comes to light and both couples break up. However, ” The Kissing Booth ” and schoolmates help Rachel and Lee reconcile, while Noah and Elle clear up misunderstandings and seal their love with a kiss.