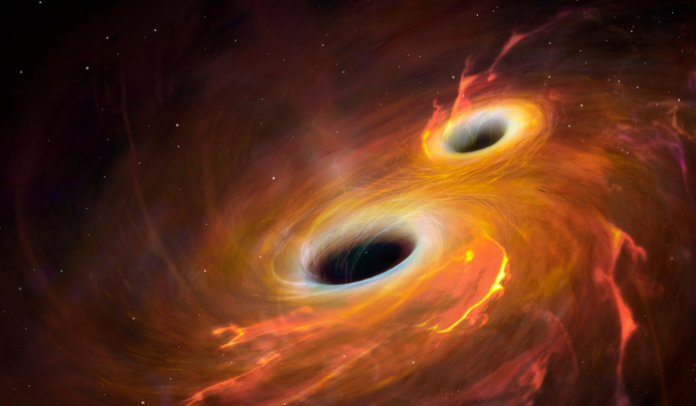 A black hole is a cluster of remnants of ancient stars, with such a dense concentration that no material particle, not even light, is capable of escaping its powerful gravitational force.

However, there is no scientific certainty as to what exactly a black hole is. Even in the past, Einstein denied these, and today, they still have researchers very confused.

To make matters worse, black holes are getting weirder, even to astronomers, as they recently detected the signal from a violent collision, which happened billions of years ago. This created a new black hole of a size never seen before.

“It’s the biggest explosion since the Big Bang,” Caltech physicist Alan Weinstein, who was part of the team that discovered this new black hole, told PBS.

But don’t worry, this vast black hole does not pose any danger to our planet, and it will not consume our Universe as it would in a science fiction movie.

It is believed that the birth of this black hole could have occurred more than seven billion years ago, and as we “just found out, this only means that it is very far from here”.

According to this report released by PBS, astronomers have so far only observed two types of black holes.

“There are small so-called stellar black holes that form when a star collapses and are the size of small cities. And there are supermassive black holes that are millions, perhaps billions, times more massive than our Sun and around which entire galaxies revolve. ”

It was even believed impossible that intermediate stellar black holes existed, with a size 70 times larger than our Sun’s mass.

However, the Universe showed us that we do not know anything about it when two detectors picked up the signal that turned out to be the energy of two stellar black holes, each large for a stellar black hole, colliding with each other.

One was 66 times the mass of our Sun and the other 85 times more, which produced the birth of the first intermediate black hole ever discovered, 142 times bigger than the Sun.

And although this explosion was surely thunderous, the signal we perceived on Earth was relatively tame because, as we said earlier, it happened billions of kilometers away from our galaxy.

“It just sounds like a thud,” Alan Weinstein told PBS. “It doesn’t sound like a lot on a speaker.”

It is currently unknown how supermassive black holes form (or how they increase in size, for that matter), but observing events like this can provide more information for further study.

It should be remembered that it was just ago, in 2019, when a black hole could be photographed for the first time in history, by the Event Horizon Telescope, a network with eight radio telescopes around the world.

Unlike this new black hole, the one captured by the Event Horizon, in 2019, is located 55 million light-years from our planet and is believed to have a 40,000 million km diameter, that is, eight times its size. Of the Solar System, and has been described by scientists as “a monster”.

Similarly, it is essential to mention that the telescopes that make up the  Event Horizon are found in volcanoes in Hawaii and Mexico, mountains in Arizona, and the Sierra Nevada in Spain, in the Atacama Desert in Chile, and Antarctica.

Purifying the air with plants, the green solution of Fabbrica dell’Aria

To combat pollution, this system exploits the filtration capabilities...
Health

A German study confirms: in the city, trees near...
Science

Asteroid 2018 VP1 is coming: What damage does it represent to the Earth?