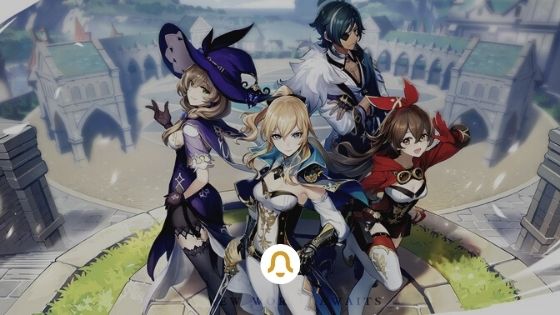 Who knows if the creators of Genshin Impact, even in moments of maximum optimism, had expected to earn more than 287 million dollars a month after the release and only from the smartphone version of the game.

Maybe yes, or it took them by surprise too, but what matters is that the title of the Chinese developer miHoYo has become a worldwide phenomenon and shows no signs of diminishing its success. It is now available for Windows, iOS, Android and PlayStation 4, but last September an upcoming version was announced also for Nintendo Switch and Playstation 5 (XboX for the moment seems completely excluded).

For those who still don’t know, Genshin Impact is an open world action RPG, in which you go on an adventure in the world of Teyvat (yes, remember that of The Legend of Zelda: Breath of the Wild ) with a group of four characters, which can be chosen from time to time among those available.

But what are the reasons why this video game has, as they say, made a bang?

It really is free

By now we are used to being wary when we are faced with a free-to-play, because in the end we always have to put our hand on the credit card to continue in the game. Genshin Impact is free. In the sense that you can go on exploring, fighting, opening chests and so on without paying a euro.  Ok, but where’s the catch? How does a free game make millions of dollars?

Here we deal with the famous gacha mechanics , the loot box-like system that leads the player to spend money (virtual and real) to get random items. Weapons, characters, items useful in the gameplay. At Genshin Impact they exist, but you don’t really need to spend money. In-game currency can be accumulated with patience, simply by playing . Of course, if you just can’t resist you can also invest money to have a better chance of catching the character you want so much or the weapon you have been sighing on for a long time. But if you don’t, you won’t lose anything in terms of gaming fun.

It is constantly renewed

In the world of Genshin Impact you don’t get bored. Teyvat’s world is huge and there is a lot of things to do, besides fighting. Explore, cook, embark on complicated time trials to solve, venture into domains (the ‘local’ version of dungeons). There are updates every six weeks or so and then there are special events, where new characters are introduced to add to the team and new storylines with quests attached . What is about to begin is also the most important and is the Lantern Festival , which comes along with patch 1.3. With a new character everyone hopes to get soon, Xiao. Here you can see the trailer (and realize the beauty of the game’s scenarios).

The combat system is not trivial

Let’s recode it: it’s a free-to-play game that you can play on your smartphone. And considering this, the complexity and variety of the combat system is remarkable . The most interesting aspect is the ability to switch between the available characters, in order to take advantage of their characteristics from time to time (and also the weapons, which behave differently depending on the warrior who uses them). Especially to create the combo of the elements . In Genshin Impact there are seven elements, Pyro, Hydro, Cryo, Electro, Dendro, Geo and Anemo and their combination has different effects to be discovered.

The company is crackling

Genshin Impact can be played in co.op mode (to unlock it you need to reach Adventure Rank 16) with up to three friends. The multiplayer version of the game isn’t one of its best features, because there are several limitations. On the other hand, what is very fun is following the whole series of memes, discussions and trends that arise from the Genshin Impact fan base, especially on Reddit . And then there is TikTok, which gives us pearls like the profile of Corina Boettger, voice of Paimon (the funny NPC who guides us in the world of Teyvat) in the English version of Genshin Impact.

Sparco is ready for the 2021 kart season

Sparco is ready for the 2021 kart season and after...
News

E-scooters are easy to monitor and manipulate

The apps of the rental companies are very informative....
Entrepreneurship

Starting a business is not a decision to be made...
Entrepreneurship

Market research is a market analysis that consists of...