NewsAlarmsGlobal Trends and News
CoronavirusCovid, public speaking without a mask is as dangerous... 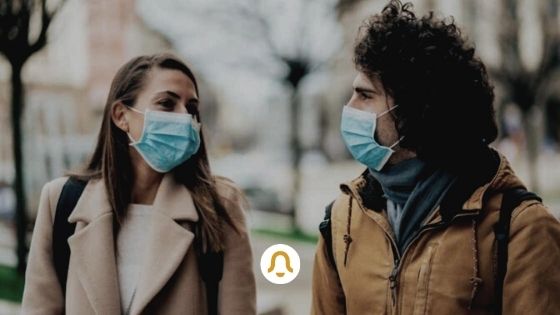 Talking for a long time without a mask in a public place – or in any case in the presence of other people – can carry the Covid infection . A recent study has shown how simple conversations can be just as dangerous in terms of contagion as coughing, considered the most direct form of spread of saliva droplets through which coronavirus spreads by air.

The danger of closed environments

It has been known for some time that the virus in question spreads through the nebulized saliva particles ( droplets ) expelled by coughing, sneezing, screaming, but – according to the study published in Proceedings of the Royal Society A – also speaking. It would explain why one of the contexts of spread of the virus are closed environments and, given that theaters, cinemas, fitness centers, gyms have been closed for months now and access to other rooms is limited, the same domestic environments. In fact, it is precisely in the enclosure of one’s own homes that the guard is most easily lowered and the mask is removed and long conversations take place.

This method of dissemination would also explain why to date the measure of social distancing has not fully produced all the desired results to defeat the epidemic. Early studies on the spread of the coronavirus had identified how the viral load suspended in the air following strong exhalation – such as sneezing, singing or screaming – was a factor in infections. For this reason, situations were banned from the first wave where there were people gathered and choirs or shouts as happens in the typhus at the stadium.

What if talking is worse than coughing?

The heavier particles fall to the ground in a short radius and are therefore not to be considered a dangerous vehicle, but the smaller ones remain suspended in the air for a long time in the form of an aerosol that can “travel” for a couple of meters / second and remain at “Float” in the air for a long time. “Talking produces much finer particles than cough and these can be suspended for over an hour in quantities sufficient to cause disease,” explained Pedro Magalhaes de Oliveira , fluid mechanics expert at Cambridge University and co-author of the study. . However, several other variables come into play: if you wear a mask, if the environment is closed, if it is closed but ventilated and / or with frequent air exchange, the distance between people talking.

Last July, the Welsh government banned the use of mobile phones on public transport , banned singing and having meals or drinks to prevent the spread of droplets. Some data collected by Yale University had in October warned about the possibility that talking indoors was a risk factor, urging attention to do so, even on mobile phones, on public transport (which are closed, crowded, and with very low air).

Based on indications from epidemiologist David Vlahov, of the American university, not to chat on the bus or subway, several administrations had recommended using the precaution of avoiding talking on public transport. In Singapore, due to the Covid emergency, passengers are required to avoid talking on board. One of the most restrictive regulations was passed in November in Catalonia, contemplating the use of a subway wagon where not talking was mandatory and not just recommended. In general, everywhere – with restrictions – capacities have been halved and the use of a mask is mandatory on public transport. There are few closed places where the use of the mask is less. And everything suggests that one of these is the domestic space.

A study published in The Lancet confirms its effectiveness at 91%. The...
Coronavirus

Mexico is already beginning to administer the coronavirus vaccine in the...
Coronavirus